Once again, the picture. The picture… I’m just out of them. I’m using the pictures of the actual game for the blog, so relax.  Let’s get this started though.

So I finally find my way to the Press Box after dealing with almost everyone who was working the event. I get on the world’s oldest elevator (I’m assuming) and we slowly creep up two stories to where I am supposed to be.

Ya know, it’s actually kind of funny that I say I found where I was supposed to be. I don’t necessarily want to out myself right now, but I will try to give you guys the gist of what happened. I will not use specific names in the following paragraphs in an attempt to not dox anyone. To preface this, I cannot confirm that this was what happened to me. My lawyer has advised me against talking about my own, personal experience in the next few paragraphs. So for the next few paragraphs, I have fictionalized an account of what may happen to a person the first time that they find themself in a press box.

So imagine this: you are a young person that is entering the sports media world. The Senior Bowl isn’t your first chance to cover a game, but it’s the first time that you are able to take full advantage of your media credentials at a game. You make your way up to the press box and panic just a little because almost all of the seats on the front row are taken. So you rush past the man in the NFL jacket and NFL hat and grab a seat next to a Bengals and a Browns scout.

In this moment you are feeling great! You somehow snagged a front row seat right at the 50 yard line in the press box. Not only this, but you are sitting right between scouts. At this moment you may feel to feel out of place. You ignore this feeling, and get up to grab lunch because, well, it’s there and it’s free. So you get up and on your way to get food you see this list:

Yeah, so you realize that you have set up camp in a seat reserved for a member of the Cincinnati Bengals’ staff. Not only this, but you realize that you don’t have a seat reserved for you. Not a great start. After seeing this you decide to move one row back, to where media outlets are set up. You start to notice that this chart is being ignored for the most part. The scouts have their seats, but the rest are really up for grabs for the most part.

After realizing this, you decide you’re to set up camp in Seat 62. Seat 62 has been reserved for Gino Balossi of SiriusXM NFL Radio. You decide that you’ll set up camp there, and if Gino happens to show up you’ll gladly move for him.

Ten minutes to kickoff, there’s still no sign of Gino. You start to feel good. You strike up a conversation with a scout from the Kansas City Chiefs (who is occupying a seat that is also reserved for NFL Radio. Five minutes into this conversation, you notice two guys bust into the press box and they begin yelling “SirusXM?! SiriusXM??” So what do you do? Keep your head down, hope no one caves and moves, and look busy.

Who would have thought that would work? It did, so you’re locked in for the game. The SiriusXM guys would immediately try to squeeze into the table and ended up shouting “We could just make you move, but we’re trying to be nice!” Not to you, so definitely to the wrong person. You laugh, and prepare your notes.

Alright now that I’m done telling that fictional story, we can get into the actual game. So there I am, sitting in my assigned seat for this game. It’s a beautiful day, a little chilly but in the climate controlled press box, I am feeling fine. The game kicks off at 1:38pm (Super obscure, but whatever).

I don’t think that the play of this game is super important to this blog. And as I typed that, I realize that sounds ridiculous. But think about it. Why are you reading this right now? You could look up game stats anywhere else. So what I’m going to do instead of break down every aspect of this game, I’m going to let you guys inside of my notes. So some quotes from my notes are as follows:

So toward the end of the game I got down to the field. I don’t know who let me do that. My credential for sure allowed me to be on the field with 5 minutes left in the game, but I was the only non-photographer on the sideline, so I was probably breaking some kind of rule. But whatever, I was just that much closer to the field and that much closer to getting my postgame interview.

So the game ends, the North Team wins 34-10. Kind of an embarrassing second half for the South Team (Steven Montez). Nonetheless, I run out on the field like the “journalist” I am. I’m kind of caught up in the moment, as is the usual trend for me. So what do I do? I just start hitting players on the shoulder pads and telling them “great game man, best of luck in the draft!” I say that for the first time to LSU’s Blake Ferguson, who I interviewed earlier in the week. I thought we had some kind of bond. He looked at me like I was insane so in that moment I was like “yeah, I probably shouldn’t do that anymore.” So, of course, I did it a couple of more times. Do I regret it? I mean, not really. What else was I supposed to do?

It’s at this point that I realize it is 2020 and I’m not on my phone. So I pull that bad boy out and start taking pictures and videos

I don’t know how but I had players posing for pictures from me. I start to feel like I made it at this point. Okay, maybe that’s a lie. The second I got the credential I felt like I made it.

A couple of Florida players start Gator Chomping in front of me. Kind of funny, I remember doing the same thing to them during their game in Baton Rouge this past October. (I’m kidding, thanks for the picture guys, super awesome. I’m sure you’re big fans.) 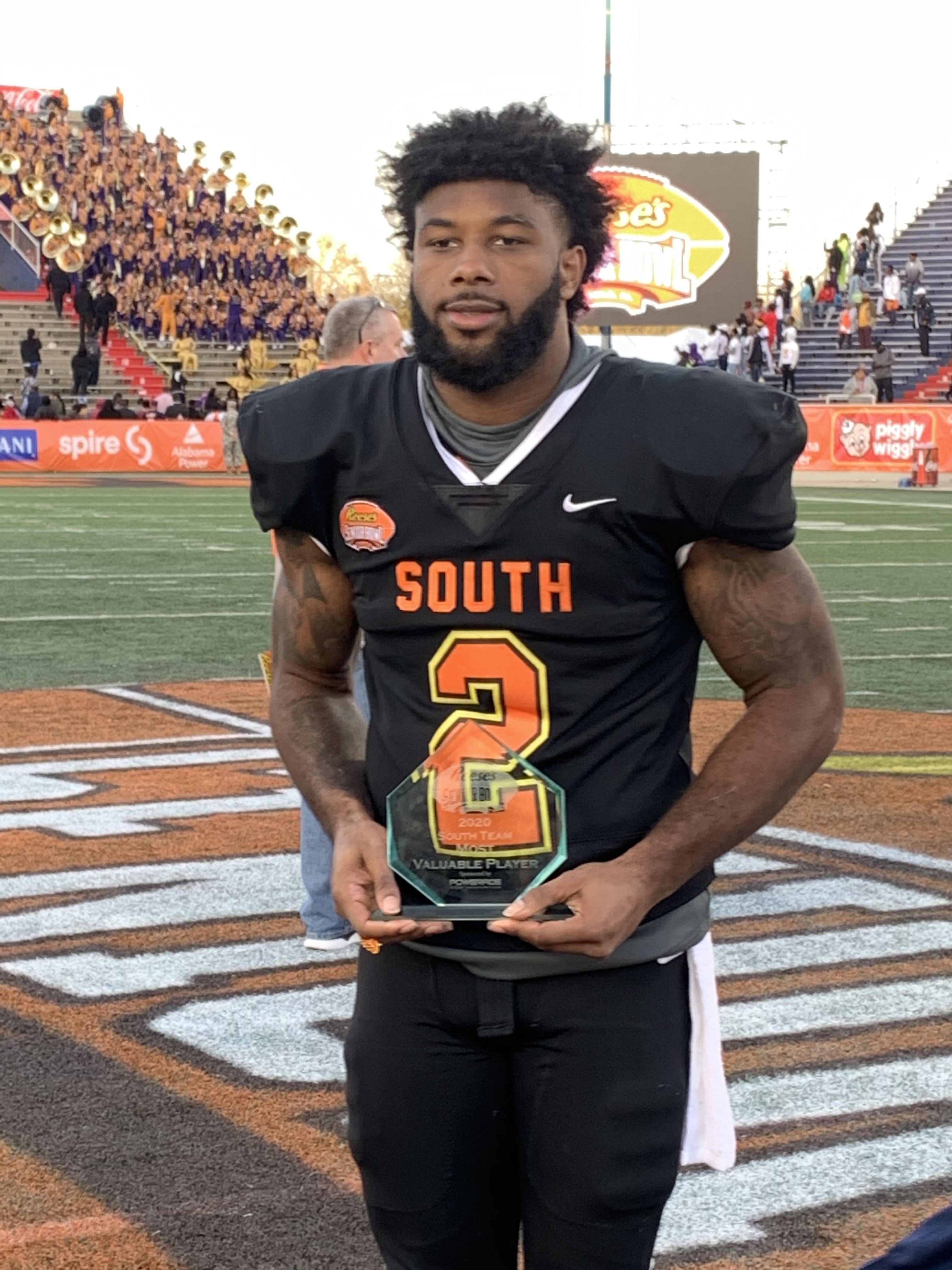 Then I got pictures of both team’s MVP, Anthony Gordon and Lamical Perine. And for those of you not following social media, well what are you doing? But also, I recorded interviews with both Justin Herbert (Game MVP) and Lamical Perine.

Immediately after snapping this final photo of Lamical Perine, I was able to get a quick (Bluebloods exclusive) interview. If you haven’t already, check out Episode 51 of the podcast for that interview (link on the right).

So this concludes my series of Senior Bowl blogs. I’ve let you guys in on everything that I experienced, and potentially more. Hopefully you all enjoyed this series, and I should be back with similar content in the near future.

So when I first started writing this series, never thought that it would come to an end. So, really, I just never thought that I would have to end the blog by saying something other than “I’ll be back with another blog tomorrow” or something to that extent. So, I’m kind of at a loss for words right now. So I’m just going to wing it.